The Czech Republic is a member-country of the Schengen Area. Schengen refers to the EU passport-free zone that covers most of the European countries. It’s the largest free travel area in the world. The Schengen agreement guarantees free movement to more than 400 million EU citizens, as well as to many non-EU nationals, businessmen, tourists or other persons legally present on the EU territory.

A uniform Schengen (short-stay) visa allows its holder to stay in the Schengen Area for the 90 days at the most. It is issued for one entry, two entries or multiple entries and as an airport transit visa. It is possible, in exceptional situations, to issue a Schengen (short-stay) visa with limited territorial validity – in such a case the visa is valid only for the Schengen states specified in the visa or for the Czech Republic only.

The Ministry of Foreign Affairs of the Czech Republic brings details information and links to forms to be filled for Visa application. Please contact the Prague Director of the Global Assembly Daniel Svoboda (svoboda@czecheval.cz) in case you need an assistance with Visa application.

Check the status of your country regarding the Schengen Area and Visa related requirements.

Check the Visa Policy to countries of the Schengen Area.

Arriving at the Czech Republic

The Václav Havel Airport Prague (in Czech, Letiště Václava Havla Praha) is a modern and spacious international airport, located on the northwest edge of Prague, about 17 kilometers north of the city and 20 km from the city center. The airport forms the central artery into the city and region. It provides access to Prague’s renowned culture, business, sports and everyday life.

All international flights arrive at this airport, including many of Europe’s best-known air carriers. This reflects and adds to the city’s importance as a cultural, scientific, and business center.

Prague Airport arrivals and departures, along with much additional information, are displayed on the airport website.

The journey from the airport to the city center takes around 25-30 minutes by taxi, or up to one hour by public transport. The airport is equipped with modern facilities throughout, offering passenger comfort similar to that in other EU airports.

Tips for travelers at the airport

Prague, City of a Hundred Spires, a UNESCO monument and one of the most beautiful cities in the world. Get to know it in person!

The Old Town Hall with the famous Prague Astronomical Clock. The winding lanes of the Jewish Quarter, which you know from the novels of Franz Kafka, steeped in the legend of the Golem. Cafes enticing you to come and have a seat, boutiques and sightseeing cruises on the Vltava. The Gothic Charles Bridge and Church of St. Nicholas in the Lesser Town, the most beautiful Baroque church in Prague. The Palace Gardens set away from the bustle of the city, Petřín with a lookout tower reminiscent of a small Eiffel Tower and the Prague Castle …

Each of Prague’s districts has its own characteristic atmosphere and unique charm. Prague presents itself to you as a changeable city, which likes to alternate styles: it is romantic and successful, ancient and modern, but above all, it is a city that is cosmopolitan through and through and is used to welcoming foreigners. It is time to get acquainted.

The most beautiful libraries in the world

It is said that the Klementinum library is in fact the most beautiful library in the world. Yet, the darkness of the space can make it difficult to appreciate this gem properly.

How to get to the Strahov Library: Metro station: Malostranska (line A), then tram 22 to Phorelec. A more indirect but interesting route is to take the funicular from tram stop Ujezd (trams 9, 12, 15, 20, 22, 23. Take the funicular railway to the top of Petrin Hill. Walk 10 minutes along Strahovska Street.

After visiting the Strahov Library, you may want to go to the Strahov Monastery Brewery.  Perched atop the city part of the Strahov Monastery compound and the lush surrounding Petrin Hill, the Strahov Brewery is a delightful find in the bustling city of Prague. Just steps from the massive Prague Castle complex, the microbrewery serves about ten variations of St. Norbert beer (3 all year round and 7 seasonally) and the brews are all delicious and fresh with crisp hints of unique flavors.

Christianity was the largest religion in the Czech Republic, with virtually all Czechs being Christians until the 19th century. Such a history gave humanity a legacy of important pilgrimage sites as the Church of Our Lady Victorious, hidden away in the Malá Strana area of the city, but well worth the trip. Built in 1613, Our Lady Victorious was the first baroque church to be built in Prague. Draped in smooth marble and gold, the church is a hidden luxury. What draws in tourists and Czechs alike is the wax effigy of baby Jesus, also known as the Infant of Prague. A section of the church is dedicated to a display of the Infant of Prague and his many fabulous gowns and gifts from famous figures of the past few centuries.

How to get there: From the Charles Bridge head towards the castle side of the river and after 100 metres you come to the Lesser Town Square (the one with ST Nicholas Church). Turn left into Karmelitska. Follow the tramline for 150 metres until you’ll find the buildings on the right stop and you’ll see the steps leading up to the front of the Church of Our Lady Victorious.

Not only Prague is worth visiting. If you have a bit of spare time, it could be quite fun to visit other places around – most of the sites around the capital are full of history and there is plenty of beautiful nature which surrounds them. Numerous websites display information about the Czech Republic and about Prague. The Czech Tourism office offers useful information on what you can expect in Prague and in the whole country. For example: 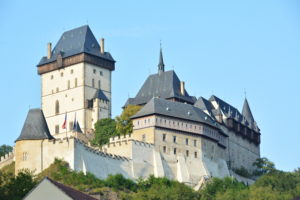 Karlštejn Castle was founded in 1348 by the Charles IV, King of Bohemia and Holy Roman Emperor as his private residence and a place of safekeeping royal treasures, especially his collections of holy relics and the Imperial Crown Jewels. In 1355 Charles IV stayed here for the first time, overseeing the construction and decoration work, especially in chapels. The construction was completed in 1365 when the Chapel of the Holy Cross in the Great Tower was consecrated. Source: https://www.hrad-karlstejn.cz/en.

How to get there: Take a train from the Prague main railway station (metro red line A station Hlavní nádraží). Train schedules are available here: https://jizdnirady.idnes.cz/vlaky/spojeni/. It takes around 40 minutes to the Karlštejn station, the walk up to the castle itself is not long then.

The caves are situated in Central Bohemia, 7 km South of Beroun, in the middle of the nature reserve of Czech Karst, not far from castles Křivoklát and Karlštejn. The caves were discovered in 1950 and made accessible for the public in 1959. The caves are developed in 400 million years old Devonian limestones, consist of three levels to be found 70 m under the ground-level and over 2 km long. The accessible part is 620 m long and sightseeing tour lasts one hour. Source: http://jeskyne.cesky-kras.cz/english/.

How to get there: Combination of buses or trains and buses. The way takes around one hour.

How to get there: Again, take a train from the Prague main railway station. Train schedules are available here: https://jizdnirady.idnes.cz/vlaky/spojeni/. This time you need to transfer once – most probably in České Budejovice (the transfer should not be too complicated and railway stations are usually quite easy to navigate). The journey is also a bit longer – it takes around 3 hours to get to the castle – but it is definitely worth seeing.

This charming town experienced its greatest prosperity during the rule of Lords of Rožmberk (1302-1602), who chose Český Krumlov to become the seat of their kingdom. At this time, Krumlov lay on the crossroads between the Czech, Austrian, Bavarian and Northern Italian lands. You can see the influence of these different cultures that have left their mark on the town and Castle with brushstrokes of the Italian Renaissance. At the end of 17th century, during the reign of House of Eggenberg, the Castle Baroque Theatre was built and the Castle Gardens were renovated. Under the rule of House of Schwarzenberg, Český Krumlov gained its Baroque appearance. Český Krumlov’s Old Town still has maintained its historic character. Český Krumlov, a UNESCO World Heritage Site, is a lively, cosmopolitan town with a unique atmosphere surrounded by unspoiled countryside. Dominated by a Castle stretching over the meandering Vltava River, Český Krumlov’s narrow cobblestone streets wind along romantic nooks between patrician houses where you’ll find attractive exhibits of world-renown artists, music festivals and concerts, and theatre performances. The cosy inns, coffee shops, and ancient taverns entertain a diverse international crowd. Source: http://www.ckrumlov.info

How to get there: You can take again a train from the Prague main railway station or a bus from the bus station Na Knížecí (metro yellow line B station Anděl). The way takes around 3 hours.

Karlovy Vary (or Carlsbad) is a spa town situated in western Bohemia, on the confluence of the rivers Ohře and Teplá, approximately 130 km west of Prague. It is named after Charles IV, Holy Roman Emperor and King of Bohemia, who founded the city in 1370. It is the site of numerous hot springs (13 main springs, about 300 smaller springs, and the warm-water Teplá River), and is the most visited spa town in the Czech Republic. Source: Wikipedia

How to get there: You can take a bus from the Central Bus Station Florenc (metro yellow line B or red line C station Florenc). The way takes around 2:15 hours.

Telč was founded in the 13th century as a royal water fort on the crossroads of busy merchant routes between Bohemia, Moravia and Austria. Besides the monumental 17th-century Renaissance château with an English-style park (a rebuilding of original Gothic castle), the most significant sight is the town square, a unique complex of long urban plaza with well-conserved Renaissance and Baroque houses with high gables and arcades; since 1992 all of this has been a UNESCO World Heritage Site. The Gothic castle was built in the second half of the 14th century. At the end of the 15th century the castle fortifications were strengthened and a new gate-tower built. In the middle of the 16th century the medieval castle no longer satisfied Renaissance nobleman Zachariáš of Hradec, who had the castle altered in the Renaissance style. Source: https://www.telc.eu/lang/en.

How to get there: You can take a bus from the Central Bus Station Florenc (metro yellow line B or red line C station Florenc). The way takes around 3 hours.

Kokořín Castle lies in the middle of a nature reserve on a steep rocky spur above the Kokořín Valley, north of the village of the same name. Originally, a medieval fortress carved in the local sandstone was built there in the days of the King Jan Lucemburský. The first recorded mention of Kokořín dates from 1320. In the same year Sir Jindřich of Osměchov recieved Kokořín manor from the nobleman Hynek Berka of Dubá who – in the middle of 14th century – had built the original castle. By the end of the 19th century only ruins remained of the castle. In 1895, the Kokořín manor, including the castle ruins, were purchased by Václav Špaček, an aristocrat from Starburg. He allocated a considerable amount of his finances to start complete reconstruction in 1911. The project represented the first complete preservation of a medieval ruin in Czechia and its recovery by the public. Source: http://www.hrad-kokorin.cz/english/home.html.

How to get there: You can take a bus from the terminal at metro red C line station Ládví, but you have to change the bus in the city of Mělník. The way takes around one hour.